A Sanctuary For Humans And Swifts Alike

On average, South Tipperary General Hospital takes in over 55,00 patients each year. The hospital is an essential part of the health and wellbeing of the human population in this part of the country. However, it is not only humans that this hospital is a haven for!

South Tipperary General Hospital is located in the large town of Clonmel. Before I ventured to this town to conduct nest site surveys as part of the BirdWatch Ireland Swift Conservation Project 2018, it was known that parts of Clonmel came alive on summer evenings with the euphonic sound of the screaming Common Swift. My job was to find out exactly where our flying friends were nesting. 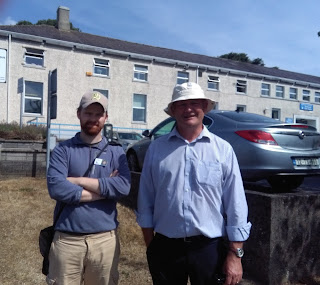 Kevin Collins (BirdWatch Ireland Tipperary Branch) and I
taking a break for a photo during one of the Clonmel Swift survey visits. Will Hayes

Always, my first survey visit to a town consists of a drive to every corner to determine what areas are most likely to have Swift nesting sites, usually followed a more focused survey on foot. For example, housing estates built in recent times are not likely to have any swift nests due to the energy efficient manner in which houses are built today (e.g. there will be no nooks or crannies for the Swift to nest in on the house's exterior). Therefore, as a rule of thumb, I would generally divert my focus to older parts of a town (e.g. old housing estates, churches and heritage sites). However, as I slowly drove into Clonmel along Western Road on my first survey visit, I could not help to notice a vast group of Swifts flying over my car. Due to the sheer abundance of Swifts flying above, there was no choice but to park the car up at the nearby Aldi and swiftly track down these feathery flyers. A break from my usual survey routine.

Once parked I had lost sight of the birds, but the booming sound that was coming from down the road led me to one place, South Tipperary General Hospital. As I climbed the steep ramp onto the hospital grounds, I could hardly believe my eyes, over 50 Swifts thundering past my head as if they knew I was looking for them. As I scrambled to get my survey sheets together, I noticed these birds were focused on one building, in particular. The Community Care Centre at the forefront of the hospital grounds. This building was different from others I had encountered on my journeys this summer. The architecture of the building would lead someone of my profession to believe it was purposefully built to not only care for people but also to house Swifts. The makeup of the fascia was the defining factor in this assumption (see picture). My hypothesis was confirmed within seconds as a pair of swifts entered one of the many gaps that existed along the fascia. I knew then that this survey was not going to be a quick one. 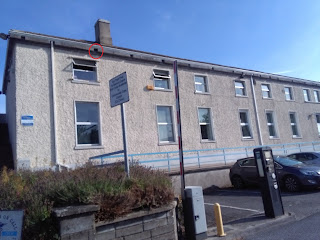 South Tipperary General Hospital Community Care Centre.
Circled in red is one of the many similar gaps that existed on the fascia of this building.
Most of these gaps were inhabited by a pair of nesting Swifts. Will Hayes

Further surveying over the coming weeks with local people revealed 40 confirmed Swift nests within the fascia of this building, concluding that the South Tipperary General Hospital’s Community Care Centre accommodates one of the largest known Swift colonies in Ireland. Furthermore, another building on the hospital grounds, the Cardiac Rehab Centre, contained a large colony of Swifts (36 birds) that was utilising gaps in the masonry and holes in the fascia for nesting sites. These findings have allowed me to determine that over 100 Swifts make the long trip from southern Africa every summer to breed on the grounds of the South Tipperary General Hospital. 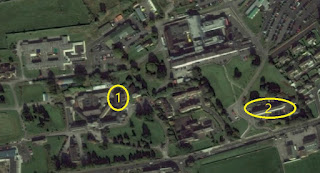 It is clear that this hospital was built with the intention of saving human lives. It has not only achieved this but has unintentionally become a sanctuary for the Swift, a native bird that is currently under serious threat in Ireland.

One Night in Nenagh

Nenagh Castle was built by Theobald Walter (the first of the Butlers of Ormond) around 1200. Rising to a height of 100 feet and spanning 55 feet in external diameter, it can be presumed that the castle tower was a safe-haven for its human occupants in times of siege over the last 800 years.

Every summer this heritage site attracts summer visitors from across the world, and no, it is not the flocks of North-American homo-sapien tourists I speak of. It is Apus apus, the Common Swift. Our flying summer visitor from Sub-Saharan Africa.

At the end of May, as part of BirdWatch Ireland's Swift Conservation Project, I was conducting a routine nesting site survey in Nenagh. The plan was to begin the survey in the vicinity of St Marys Church, Nenagh Courthouse, and Nenagh Castle and then branch out across the town as the evening progressed. This plan did not go to plan. A short time browsing the skies and I spotted a pair swirling above the courtyard of Nenagh Castle, and this wasn't to the only couple of Swifts to appear. After gaining access to the grounds of the castle (gates close at 4 pm) through my assistant for the evening Jim McGuire, we soon had fourteen of our friends occupying the air above the castle tower. We knew now we were in for a jam-packed evening.

As the survey progressed and the Swift numbers increased we began to identify nesting sites on the castle towers exterior walls where the birds entered and exited. First, we identified a group of three nesting cavities close to the right of a window's edge, followed by two more nesting sites just above. Five in total. Then all of a sudden, the usual screaming of the swifts came to a halt, and the skies were empty (around 7.30 pm). This absence was unusual, and after about 20 minutes we thought our work here was done... We were wrong, so very wrong.

Out of thin air, we had close to thirty birds screaming and dashing past the castle’s walls. Our heads were moving left to right faster than the beat of a hummingbird’s wings. After about 40 minutes of this anarchic surveying, we identified over 20 nesting sites in the castle tower walls. Not bad for an evening’s work!

An interesting finding, asides from the sheer abundance of Swifts, was the location of the nesting sites. We identified all nests within a 6-metre belt encompassing the tower. Jim, a local man, informed me that this might be due to the great work of the Office of Public Works (OPW). During renovations of the castle a few years back, OPW workers noticed that swifts were nesting all around the tower and ceased from filling in holes/crevices in case they were swift nesting sites within the 6-metre belt. For me, that deserves credit given for when credit is due as the Swift's could not have survived here without this kind consideration. Bravo OPW.
On the drive back home following this exhilarating evening I wondered if the many bygone occupants of the castle would be happy if the knew that it is still a safe haven for their former flying neighbours. Swifts, the ancient guardians of Nenagh Castle.

The County Tipperary Swift Survey is being conducted with the support of the Heritage Council and Tipperary Heritage Office.
Posted by Unknown at 07:09 1 comment:

A weeklong schedule of events is being hosted by groups involved in Swift conservation here in Ireland. Swift Awareness Week will run from Friday June 15th to Saturday the 23rd June. BirdWatch Ireland and Swift ConservationIreland have come together to host a myriad of events across the country, an initiative which mirrors events being organised by groups in the UK during the same period.

Swifts are a migratory bird that visit Ireland and northern Europe in the summer. They return to the same nest site each summer to nest and raise young. They migrate from southern Africa where they have spent the winter following the rains and feeding on the resulting profusions of insects.

Swifts are a real sign of summer, arriving in Ireland in the first days of May and vanishing again by late-August. They are a bird highly adapted for life on the wing, they feed, sleep and even mate on the wing (the only group of birds known to do this). They spend the summer whizzing around our towns and cities feeding on winged insects and making their characteristic screaming calls as they go about their daily business. Swifts are often confused with Swallows and House Martins but are larger, lack the white on the underside of the body and do not build the mud nests we on gables and below the eaves of our homes.

Swifts are amazing aerial acrobats and can be seen over most towns and cities during the summer months but in recent decades their numbers have declined significantly due to the loss of nest sites and the affects of climate change. Swifts have evolved to nest in old buildings, in holes in the eaves of houses, behind fascia boards gaining access to the top of walls and in gaps in stone-built walls. Modern buildings are designed and constructed differently than to those of the past and inadvertently exclude Swifts from nesting. Restoration work and home improvements can also lead to the unintentional loss of nest sites by blocking up entrance holes.

In Ireland there are numerous groups and individuals working to raise awareness for Swifts, implement conservation policy and oversee practical measures to help arrest the decline and help recover Swift breeding populations.

Posted by Ricky Whelan at 04:42 No comments:

We are a science-based conservation charity, and Ireland’s largest environmental NGO with:

- 30 local branches across the country

- 400 events free to the public in every year

- 116 partners across the globe in BirdLife International

- 18,000 people who receive our e-zine, a monthly update about our work.
Become a Member Today 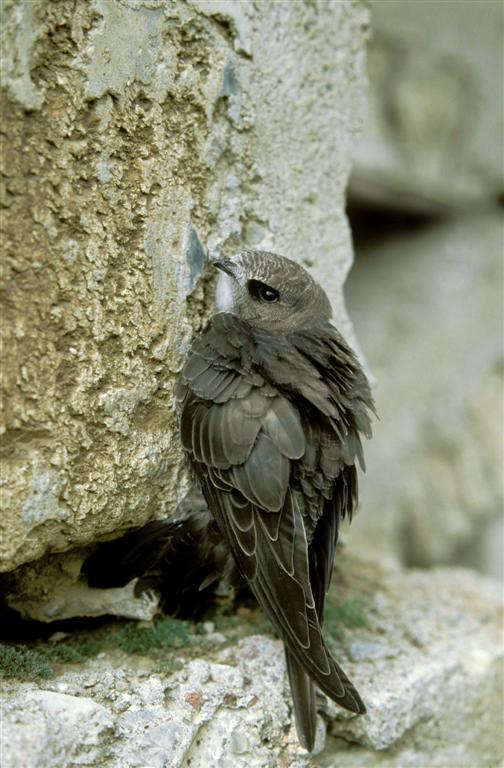 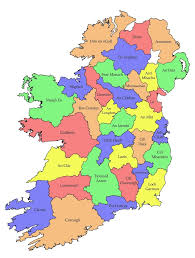